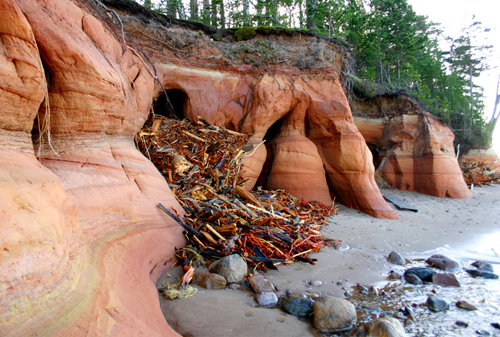 The North Vidzeme biosphere reserve hereinafter NVBS was founded on December 11, 1997. It is currently on the greatest special areas of conservation (SAC) in Latvia. NVBS was recognized as an internationally important conservation area within UNESCO program "Man and Biosphere" (MaB). It was officially included in the global Biosphere Reserve Network. However, it can be said that NVBS started its existence way earlier, in 1990. That was the year when North Regional Nature Protection Complex, which served later as a basis for the foundation of NVBS, was established.

Biosphere reserve represents the ecosystems of forest and Baltic Seashore typical for moderate climate zone. It also includes the small coastal river basins of the Vidzeme part of the Gulf of Riga. The territory comprises 457,708 ha land area of such regions as: Salacgriva, Rujiena, Aloja, Mazsalaca and Naukseni as well as a part of territory of such regions as: Limbazi, Burtnieki, Valmiera, Strenci and Valka. The territory roughly takes almost 6% of the overall territory of the Republic of Latvia. Almost the ninth part of Sea coastline of the Republic of Latvia or in other words 57 km with the conjoined territory of 17,806 ha of water area up to 10 m depth is included into the territory of the reserve.