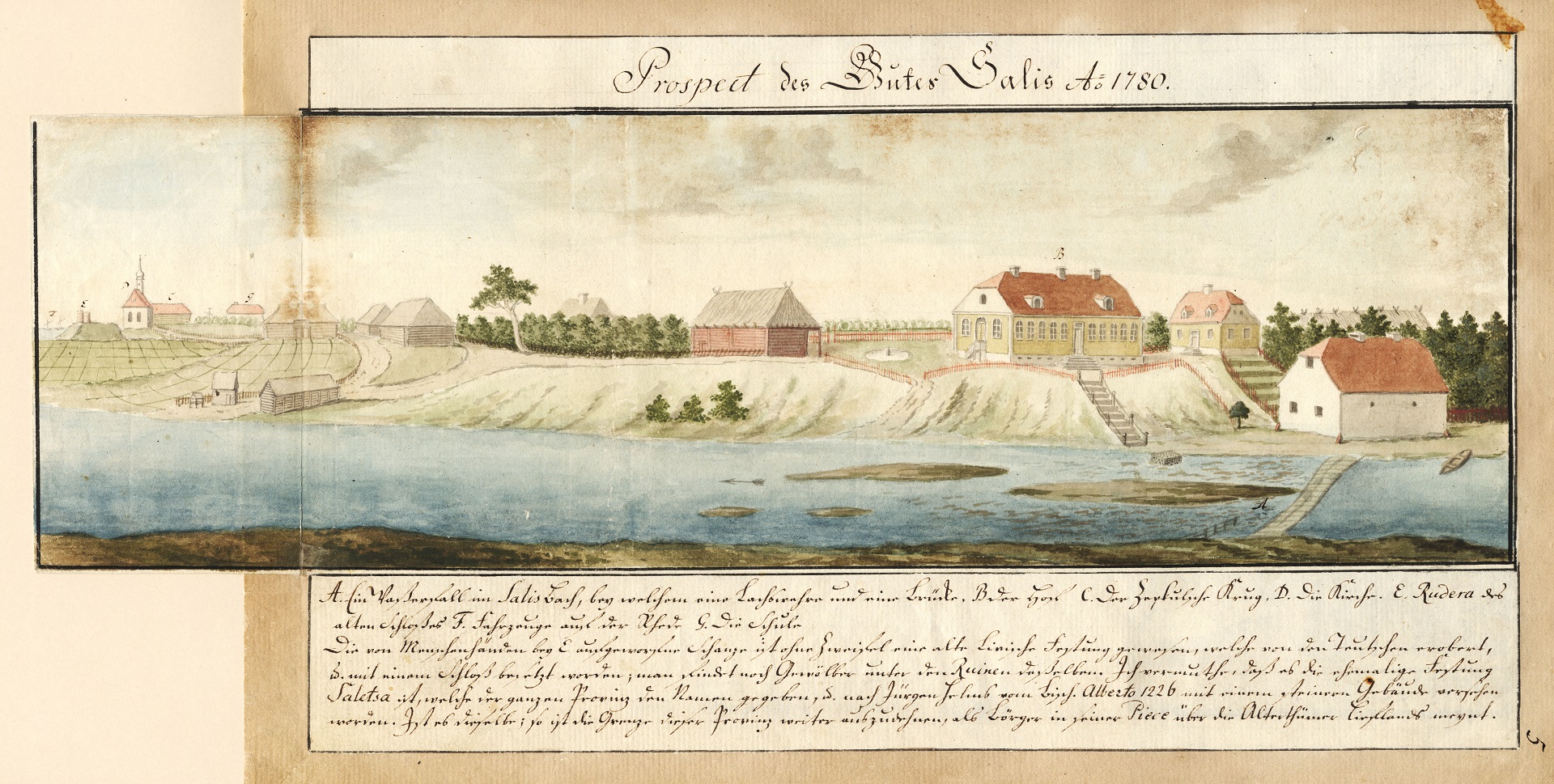 Johann Christoph Brotze – an artist of the age of enlightenment, pedagogue, historian, and ethnographer, drew Salacgriva and Vecsalaca manors three times in 1780. He enjoyed travelling around Vidzeme. He compiled historical facts and depicted everything that he encountered in his everyday life.

A. A waterfall on the Salaca River where there is a salmon weir and a bridge; B. A manor; C. The pub of the Pāle estate; D. A church; E. Old castle ruins; F. Raid of vehicles; G. A school. A manmade row at the E by all means was an ancient Livs fortress that had been concurred by the Germans where they built a castle the remains of which can still be found under the ruins. In my belief, it is an ancient fortification Saletsa, which gave the name of the entire district, and according to Jürgen Helms, Bishop Albert built a stone building here in 1226. Shall it be so; the boundaries of this district are to be extended further than Berger believes it in his writings about Vidzeme antiquity.

A. A district in Vecsalaca; B. A district in Svetciems; C. Large wooden boats, which are to anchor during the raid because there is a shoal at 3D.; E. Cargo boats - flat and wide vehicles – to provide delivery of timber and planks using wooden boats to C, from this place the cargo is taken to Riga; F. Fishing boats.
Comment [5a] The Salaca River in its rocky bed washes out beautiful fossils such as: astroites, troctolites, jadeites, corral polyps, belemnites, tubulites, pectinites and even a 10-pound heavy petrified corals.
Explanation: During the Middle Ages the estuary of the Salaca was the only port of the Livonian large feudal – Riga Archbishop. Larger ships, however, had a difficulty to enter the port due to the sandy shoals. The depth of the port did not exceed three-four meters. The first jetties were built only at the end of the 18th century, which partly protected the Salaca estuary from alluvion with sea sand and made the delivery of timber and firewood to Riga easier.